Decision support tools are designed to help end users make more effective decisions on how to act in the most appropriate way to minimize the contamination of drinking water. This can be achieved either by leading end users through clear decision stages and presenting the likelihood of various outcomes, or by optimizing (minimizing) the use of e.g. manufactured fertiliser nitrogen and pesticides with respect to a legal framework which excludes harmful substances and specifies usage limits (and eventually also by taxation). DSTs might also be designed to help end users make more cost-effective decisions, from both private/economic and a social/welfare points of view. They can be dynamic software tools, whose recommendations vary according to the user's inputs, and they may suggest an optimal decision path (Rose et al., 2016).

For the purposes of this review a DST was defined as any bespoke or generic software, email/text alerts, online calculator or guidance, phone app, and paper-based guidance that could contribute to an end user decision affecting surface or ground water quality. The definition does not include ‘human-based’ DSTs, such as advisors or peers. In addition, the DST must be currently in practical operation (i.e. in active use) or scheduled for release by 31st December 2017. The DSTs considered were those used by the project partners involved in this Task and elsewhere in Europe (including Norway, Switzerland and other non-EU countries with similar agro-climatic conditions e.g. New Zealand) on farms and within single catchments, groundwater abstraction areas, regions, countries or larger areas. Demo-versions of DSTs were included if they were functional, had been tested on end-users and were assessed to have a potential for practical use.

End users were defined as:

The focus of the review was on DSTs operating at farm, regional or national scale that could be of practical use in reducing nitrogen or pesticide pollution in the project MAP areas; EU level models such as MITERRA-EUROPE for nitrogen leaching (Velthof et al., 2008) were not considered.

An initial list was compiled of the DSTs currently in use in the participant countries. This was approached in two ways:

The DSTs identified in the literature search and by the participants were combined into a ‘long list’. An assessment was made of the search comprehensiveness by circulating this list to the participants who were then able to identify whether any key DSTs had been omitted and add them to the list as appropriate. The participants also confirmed whether the DSTs on the long list were in active use. 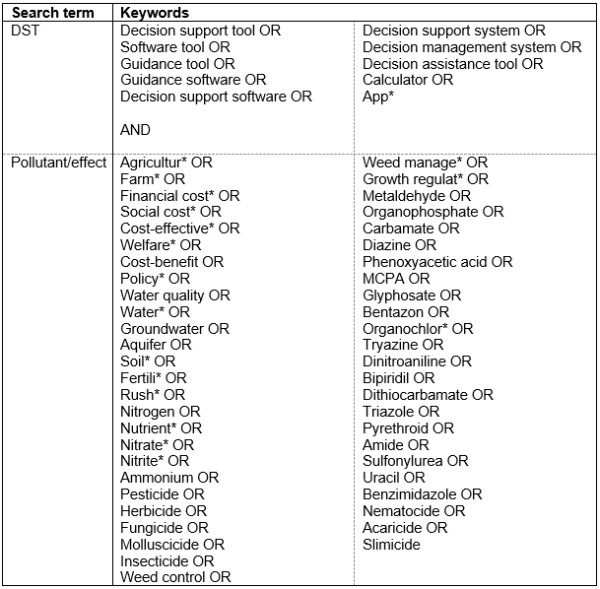 Once the database was complete, the DSTs were grouped according to their broad topic area (i.e nutrients or pesticides) and colour-coded to more easily identify the primary users and scale at which they operated (Tables 3 and 4). 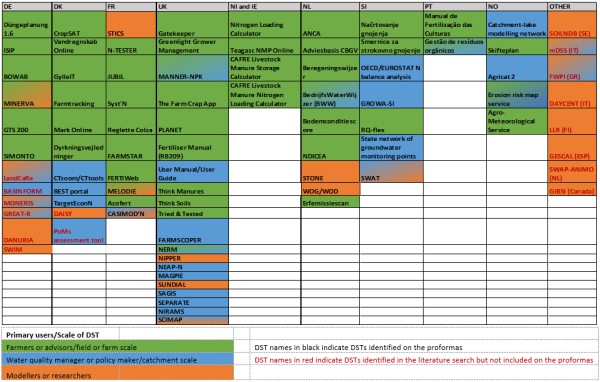 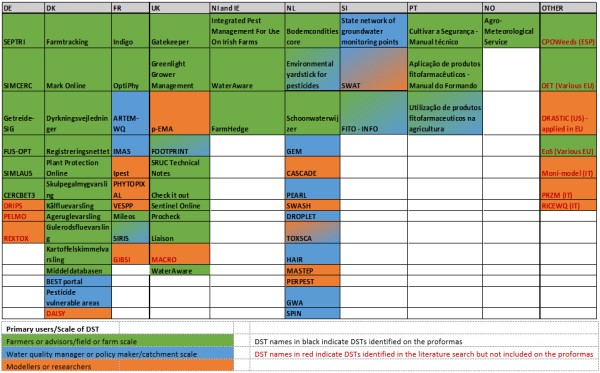 Because of the very large number of DSTs on the long lists (>150), it was not feasible (or useful in terms of acheiving the aims of this task) to undertake a literature review which examined each DST in detail. Therefore the participants were asked to identify (based on their knowledge and experience) a short list of 3-5 DSTs from their country which they assessed to be the most widely used and/or of most potential relevance in the case studies. This reduced the number of DSTs for further consideration to 36.

Note: For full references to papers quoted in this article see