The Voulzie basin is part of the Champigny limestone aquifer located in Seine-et-Marne, 70 km south-east of Paris. This aquifer is the main groundwater resource in Ile-de-France and a very important  drinking water source for Paris. Eau de Paris is a public organisation in charge of managing water resources for Paris and supplies 176 Mm3/y to 3 M people. As the aquifer is located in an area of intensive agriculture, one the main challenges for Eau de Paris is the protection of water resources while also meeting the local needs of territories. For that reason, Eau de Paris developed a privileged relationship with farming associations and representatives. Eau de Paris is particularly active in promoting agri-environment measures to reduce nitrate and pesticide use.

2. La Voulzie case study and its role in FAIRWAY

The Voulzie catchment is 115 km2 and covers 15 rural municipalities with about 100 farmers (including 1 organic farmer). Ninety percent of the surface area is cultivated, 40% of which is occupied by wheat. It has a temperate continental climate, with annual temperatures around 3.2°C in January and 18.6 °C in July and mean annual precipitation of 650 mm. The catchment provides 20 Mm3/y of water, 10% of Eau de Paris's resources, to 400 000 inhabitants. 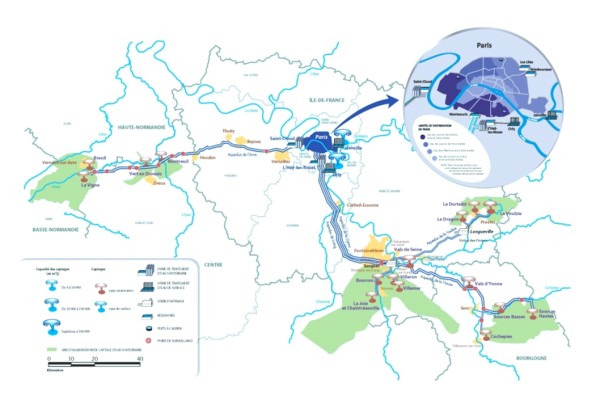 Water quantity and nitrate data are available from 1925 and have been reported on a monthly-basis since 1987. Pesticide monitoring of 18 molecules (ncluding atrazine and its metabolite desethylatrazine DEA) started in 2001. Since 2012, 52 molecules have been assessed on a monthly-basis in all springs. Since 2007 more intense monitoring of 400 pesticides has conducted every 15 days in 3 springs. Between 1930 and 1960 nitrate concentrations ranged between 20 and 25 mg/l. They then increased until 2000, with occasionally recordings of more than 50 mg/l. From 2000 concentrations have started to decrease in response to action plans initiated in the early 1990s. In 2001, atrazine concentrations ranged between 0.1 and 0.2 µg/l. Its use has since been withdrawn and concentration has consequently decreased, down to 0-0.1 µg/l in 2014. DEA concentrations ranged between 0.3 and 0.6 µg/l in 2001 and thereafter decreased to reach 0.1 - 0.4 µg/l in 2014.

Since 1990, Eau de Paris has led actions to reduce nitrates pressure on the basin and since 2007 to reduce pesticides pressure. Their targets are 50 mgNO3/l for nitrates and 0.1 µg/l for pesticides in groundwater, to be achieved by using agricultural management to reduce transfer of nitrates and the use of pesticides.

Eau de Paris promotes agricultural practice changes using agri-environment measures organised together with local farmers. It closely follows their application and their impact on water quality in order to identify agronomic actions or land use that have a limited impact. The good cooperation between stakeholders in La Voulzie basin is illustrated by:

The catchment is karstic, so the whole surface area is sensitive to fast transfers, especially pesticides. Eau de Paris has decided to work on the whole catchment with volunteer farmers. Mitigation actions which are identified by Eau de Paris are shared with farmers who want to change agricultural practices.

All farmers in the recharge area are invited to join the project and a large number of them are active in it. New challenges consist of implementing new measures and preservation of good agricultural practices when financial compensation stops.

This case study is used in several other studies on the impact of change of agricultural practices on groundwater at a national scale due to its interesting data base of water quality since 1925. Lysimiters are also implemented on some fields, for another study at Seine basin scale. The aim of this study is to compare nitrate leaching in this area with other areas for different agricultural practices.

The water quality targets are site-specific and are the result of a study defining an action plan against diffuse pollution. The prefecture may make mandatory the realization of the action plan against diffuse pollution on a given period (although this has not been the case for this catchment). Eau de Paris is responsible for monitoring water quality. The Chamber of Agriculture has an advisory role in farm management. The farmers regulate themselves. There are also mandatory controls (e.g. sprayer control). For the reduction of diffuse pollution, preference is given to consensus among the stakeholders.

There is a pre-existing group that will be engaged with as a multi-actor platform in FAIRWAY. It included Eau de Paris and about 100 farmers and rural communities. Eau de Paris is a big water company and uses water resources of this basin for drinking water supply of Paris. This is not always well accepted by local authorities and farmers. The challenges for the MAP include better cooperation between stakeholders (citizens, farmers, local authorities) and the development of tools to enable the right balance between economic activity and preservation of water resources.