Dravsko polje is an alluvial plain of the river Drava, in north-eastern Slovenia. It covers 293 km² with altitudes between 205 to 364 m.a.s.l. The area is administratively divided among twelve municipalities, each one with their individual rights and responsibilities in managing land use policy and wastewaters.

As water is a resource of national importance, it is in general regulated by the state. This is the case of the Dravsko polje study area which has two decrees on water protection zones (WPZ),

Municipalities have also the right to enforce decrees on municipal water protection zones for small water resources of local importance.

2. The particular case of Dravsko Polje and its role in FAIRWAY

The agricultural land lies above an intergranular unconfined aquifer with 20 to 35 metres thick carbonate or silicon layers with high a coefficient of conductivity of 10-3 m/s. The depth from the surface to groundwater varies between 15 m in the northern to 3 m in the southern part of the study area. The aquifer layer thickness is from 5 to 21 m, with a medium to high level of groundwater, which is the main (100%) source of drinking water in the area and supplies water to six drinking water systems. 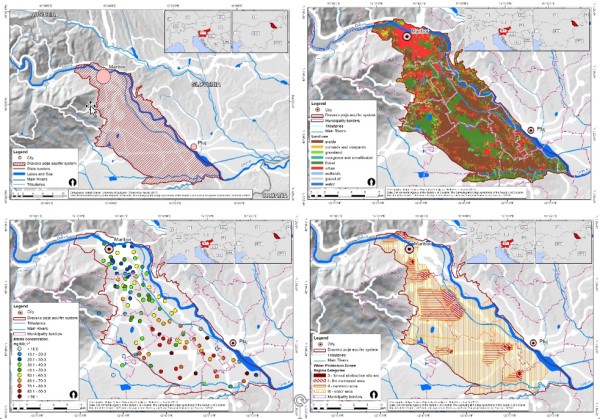 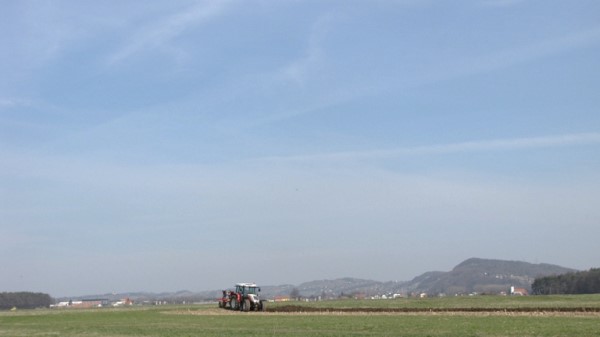 The specific soil characteristics are the result of the deposition of river sediments and are usually light and airy (silt loam or a sandy loam texture), evolved on gravel and sand and are therefore shallow (0.24 to 0.77 metres) which is favourable for the majority of agricultural crops. According to the international soil classification (FAO) Distric Cambisol (53%) and Calcaric Fluvisol (12%) are the predominant soil types, based on non-carbonate gravel bedrock. These soils are very susceptible to nutrient and pesticide losses and leaching into the groundwater.

The area is suitable for intensive agricultural production (intensive arable and livestock), due to the favourable climate, flat relief, structure of agricultural holdings and the size of land parcels.

Sixty-eight drinking water extraction points under 6 water supply systems are under water protection regulation. Average annual extraction is approximately 3.5 Mm3/year and is distributed to the cities of Maribor and Ptuj and small and medium size villages. The total number of inhabitants relying on drinking water from this area is approximately 130,000. Two water protection regulations are in force protecting the aquifer as the primary source of drinking water. Water companies have to mix water from shallow and deep wells to reach acceptable quality of tap water. Regular state monitoring is implemented by Slovenian Environmental Agency (ARSO) and by drinking water supply companies in Ptuj and Maribor. The shallow aquifer is contaminated by nitrates and pesticides, mainly from livestock farms and intensive arable land management. The deep aquifer is practically free of nitrates and pesticides but the recharge rate and area are unknown. The deep groundwater chemical status is worsening because of the influence (leakage) of the upper shallow aquifer. Due to prohibition of the most problematic pesticides (atrazine) concentrations (up to 0.2 µg/l) are showing a long-term slow decrease with occasional values in excess of the limit (0.1 µg/l). Measured concentrations of nitrate (NO3-) in groundwater are at many monitoring points (central and lower part of the area), well in excess (40-70 mg/l) of the WFD recommended concentrations for drinking water (50 mg NO3-/l). Although the last report of the quality of groundwater in aquifer of Dravsko polje showed slow decrees over the last decade, the chemical status of groundwater is not improving at rate expected. Measurements at wells showed that nine out of twelve (standard points) do not fulfil quality standards on nitrate for clean drinking water. While six extraction points do not fulfil quality standards for pesticides (atrazine, desetil-atrazine, metholachlor).

Several research and monitoring projects have been carried out in Slovenia concerning groundwater quality and quantity. FAIRWAY opens new areas of research dealing with social aspects of organising official multifactor platform (e.g. water partnerships) as proposed by WFD, where stakeholders associated with the water body can equally discuss environmental and agricultural measures focused on water quality and adopt common decisions that are binding for all parties. We would like to analyse and learn from other case studies how to improve communication between land managers (farmers), water companies and government.

FAIRWAY can answer to the questions regarding efficiency of national and common EU policies and expert and research knowledge transfer in to the practice which reflects in water quality status.

Different initiatives and measures have been implemented over the years such as:

Decrees on the water protection area include detailed descriptions of measures, including when, how, how much and for which crops to use certain fertilisers and plant protection products. The measures also regulate water abstraction, spatial planning (e.g. construction of buildings, pipelines, reservoirs, transport) and wastewater treatment plants and emission. The magnitude of the restrictions is defined by regime in WPZ categories (0, I, II, III – lower the number stricter the regime). Measures in the state decrees for Dravsko polje aquifer were first enforced in 2007 and thereafter changed again in 2011, 2013 and 2015. Changes were made as part of a negotiation process between stakeholders organised in civil initiatives (farmers) or municipalities and state.

It is not entirely clear how efficient the measures from state decrees are on WPZ for Dravsko polje aquifer. Measures in decrees were enforced together with other environmental and agricultural legislations, so their effects overlap. It is obvious that nitrate concentration on average dropped after 2007, but values are now constant with any remarkable change despite the decree being changed three times. However, there are many wells with concertations high above the quality standard. More obvious is the drop of concentrations for total plant protection products (pesticides). The main reason is the prohibition of use of certain dangerous active substance (atrazine, desetil-atrazine, metholaclor). 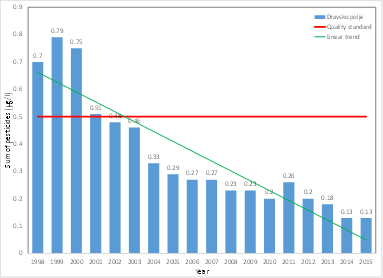 Remaining challenges include to:

As ground water in Slovenia accounts for 95% of all drinking water, the organisation of functional MAPs and evaluation of measures efficiency also important for other areas. This is a pilot study on how system of water management could function in to pollution exposed water bodies.

The following actors and stakeholders are involved in water governance

The Slovenian Environmental Agency reports the results of the monitoring campaign to the Ministry of Environment. Based on EU Directives and national legislation (and in cooperation with Ministry of Agriculture and different institutions and organisations dealing with public health, waste waters or agriculture) they prepare measures tackling the water quality problem. Base (draft) documents are prepared by governmental and research organizations and are put in public discussion. These measures are incorporated in different level of legislation, policies or plans.

Basic measures are collected in the Decree on WPZ. Implementation of the water protection area decrees is subject of intensive process that includes

Additionally measures are also incorporated in obligatory cross-compliance of the Common Agricultural Policy (CAP) and voluntary subordinate regulations like Rural Development Plan (RDP) where farmers have, under different operations, the possibility to choose between different sets of agricultural-environmental-climate measures.

River Basin Management Plans (RBMP) contain collections of all identified necessary measures to be implemented for the improvement of the water bodies’ quality state as well as a financial budget for plan execution. Funds are collected form the state, municipalities, EU and from polluters. Measures in RBMP Program of Measures are classified in three groups:

Targets are set by Ministries responsible for environment and for agriculture in collaboration with governmental agencies, institutes and other research organisations. Targets are always part of regulatory or policy framework.

Responsibilities for monitoring and management are as follows.

Some agreements for resolving conflicts have been made in the past. The decree was simplified in certain parts and state subsidies for the most affected farms on WPZ are paid out based on the Decree on the method of payment and the criteria for calculating compensation for the reduction in income from agricultural activities resulting from the adaptation to a water protection regime (2011-2016). The method is prepared by Agricultural Institute of Slovenia and verified by Ministry responsible for agriculture. According to farmers, the are subsides still too low. Lower than if they could apply for RDP subsidises.

The compensation payment is paid by public service companies of drinking water supply, which manages the water source. Funds are provided by Ministry responsible for water. As this is state help it is under direct supervision of European Commission.

However there are still a huge tension between government and farmers regarding exchange of the land from the narrowest WPZ I with the land outside WPZ I. Land on WPZ I is also excluded from implementation of agri-environmental-climate measures for water protection under RDP. It is excluded because farmers would get double payments from state which are forbidden. Farmers are not offered the choice of which payments are better for them.

There is no existing platform for for engagement in the case study. Civil initiatives have direct communication with ministries representatives (Minister, Secretary). We propose to establish MAP as WFD proposes in form of Water partnership (slo: Partnerstvo za vodo).

There are many challenges and misunderstandings between different stakeholders. The MESP is responsible for water quality and reports to the EC on state of the water body. If water body quality is not improving the State of Slovenia could get fined. In this manner MESP issued measures in the form of Decree on WPZ to protect itself and state interest. As current measures are not efficient enough, MESP will have to introduce new measures in the future and that will cause new complications. The MAFF is responsible for farmland management and fully support MESP and its activities.

On the other hand we do not have any clear (measured) evidence on the efficiency of measures from the decree on WPZ, especially as impact are also results of CAP cross-compliance and improvements in sewage system and waste waters treatment plants. However, the University of Ljubljana modelled N balance in the case study and confirmed that measures of the WPZ I have very strong significant impact on reduction of N leaching, while measures from WPZ II and III had negligible effects. As the WPZ I area accounts only for 2.3% of total agricultural land of Dravsko polje case study area the impact on total N balance is minor with approximately a 5% reduction.

Farmers are upset as they can’t exchange land inside the WPZ I zone for land outside it as compensation payments are lower and production costs rise every year. Drinking water companies are just intermediaries in transferring money from the state to farmers. The Farmland and Forestry Fund owns land which could be used for exchange, but this is hired by agricultural companies and they do not want to release the land until contracts are valid.

Establishing a MAP will contribute to the formalisation of current occasional meetings of farmers with government. Expanding the MAP to include informed stakeholders with sufficient knowledge and with the support of the research community could allow the problems to be solved and misunderstandings cleared. None of the stakeholders is satisfied with current state of the problem and the solutions.