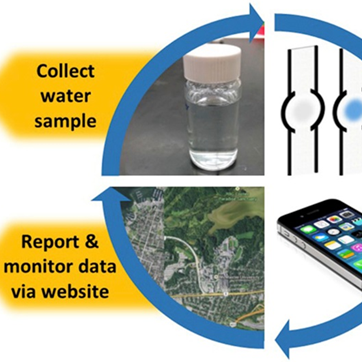 In this section of FAIWAYiS we identify, evaluate and further develop transparent agri-environmental indicators to monitor and assess the impact of measures and good practices on drinking water quality. Appropriate monitoring tools are needed to help develop and implement governance models to preserve the quality of drinking water resources. Here we:

Note: The extensive information given here is complete scientific results of the FAIRWAY project, as presented in the project deliverables. Deliverables are being written and added to the website throughout the period of the project, until it ends in November 2021. The availablility of and access to the scientific results is indicated in the introductions to each section

Public access
Restricted access  (for project partners only, to allow authors time to publish their results)
Not available yet  (the research is still underway)

Nitrogen and pesticide cycles in the agri-hydrogeochemical system

We start this section by defining the agri-hydrogeochemical system and looking at the pathways that nitrates and pesticides follow from the agricultural system to the drinking water supplies. We consider the challenges in monitoring and regulation, particularly of pesticides, and how contaminated water is treated in water works.
»Nitrogen and pesticide cycles in the agri-hydrogeochemical system

We then look at what data and statistics there are available on the regulation, marketing and use of nitrogen and pesticides, what indicators are used to monitor them and how indicators are intended intended to support central and local administration and policy-makers, water companies in analysing the situation of diffuse pollution and selecting measures to protect drinking water resources.
»Data and indicators to regulate and monitor the use of nitrates and pesticides

The DPSIR model is defined as “causal framework for the description of interactions between society and the environment”. It was adopted by the European Environment Agency (EEA 2018). According to its terminology, social and economic developments (Driving forces, D), exert Pressures (P) on the environment and, as a consequence, the State (S) of the environment changes. This leads to Impacts (I) on ecosystems, human health and society, which may elicit a societal Response (R) that feeds back on Driving forces, on State or on Impacts via various mitigations, adaptations or curative actions (Smeets and Weterings, 1999; Gabrielsen and Bosch, 2003). In FAIRWAY we consider ADWIs within the DPSIR-framework. The adjusted DPSLIR-framework contains a new element, the Link Indicator.
»Developing FAIRWAY agri-drinking water quality indicators (ADWIs)

Agri-environmental indicators (AEI), as developed by OECD and Eurostat, are implemented and further developed for the monitoring and evaluation of the negative and positive impacts of agricultural activities on the environment. AEIs are used on European/national level (28 AEI are listed in fact sheets related to COM final 0508/2006 (Eurostat, 2018). The AEI are applied e. g. to evaluate/benchmark the transcript of EU-legislation at Member State level), at regional level (to monitor the impact of agriculture on environment, identify hotspots or focus subjects and areas for the agricultural advisory service) and at farm level (as decision aid tool for the farmer). Agri-drinking water quality indicators (ADWIs) to be developed in FAIRWAY are defined as indicators for the quality of drinking water. As drinking water may be produced from groundwater or surface water, ADWIs aim at the quality of both. As done for the 28 harmonised AEI (COM 2006, Eurostat 2018), we classified all ADWIs, which the case studies reported into the adjusted DPSLIR framework. We added further ADWIs according to a literature review. The ADWIs listed in the table may work as indicators by themselves or they are elements of compound indicators. Indicators for both, nitrates and pesticides, are listed in the same table, in order to avoid redundance as far as possible.
»Agri-drinking water quality indicators at farm and drinking water levels

All the ADWIs that are the subject of the survey among the case studies, those proposed by the case study leaders to be included in a further evaluation and those which, according to a literature review, are used for pesticide and nitrate monitoring/risk assessment are listed and described. Indicators which act in the agricultural sector as Driving forces and as Pressure indicators, are far more numerous than State respectively Impact indicators. The large number of agricultural Driving forces and Pressure ADWIs also explains, that from this part of the DPSLIR-model, many factors may influence water pollution. State indicators which are used for the evaluation of the water quality are on the contrary far more standardised, like the water quality standards they are supposed to monitor. A prioritisation of ADWI is therefore above all necessary for the Driving forces and Pressure indicators in the agricultural sector, in order to focus on the most significant, prevalent, effective and easy to use indicators. The survey on ADWIs already used in case studies and the most promising indicators leads to a first weighting of indicators.
»Prioritisation of agri-drinking water quality indicators

In order to further drive forward the proiritisation of the selected ADWIs in FAIRWAY, we intend to connect ADWIs from the agricultural and the water work side, using statistical methods. We also intend to further investigate on the Link indicator, especially how this ADWI fits in between the other indicators. We intend to examine

For this purpose, a database of ADWI-data on catchments-level will be established by collecting data from the FAIRWAY-case studies. Preparatory work has been carried out, using the Voulzie case study, in order to specify the data request to the case studies. Statistical analyses of data of the Voulzie case study showed, that the spring discharge time series can be rather well explained by the evolution of the recharge of the year before. The first attempt to build this database enabled the calculations of indicators as well as the first links between Pressure indicators and State indicators. Finding the proper, statistically based link between agricultural Driving forces and Pressure indicators and the State/impact indicators might supply ADWIs on a reliable basis.
»Further prioritisation and evaluation of agri-drinking water quality indicators

IT/sensor and automatic sampler techniques for pesticide and nitrate sampling

Monitoring has evolved considerably over the past ten years and even more in recent years. There are broad avenues for innovation and, as part of the FAIRWAY project, a review of in situ monitoring methods has been achieved, in accordance with the chapter on participatory monitoring. Many methods can also be applied in the laboratory. A review showed that many tools (some are prototypes) and methods are being developed to improve measures for both nitrates and pesticides. The developed methods are based e. g. on optical sensors and paper based sensors. These tools make it possible to improve the confidence in the measurement while improving the analytic capacities of the devices (limits of measurements and types of molecules). In addition, relays with smartphones can be developed to facilitate the reading of the results and to trust them.
»IT/sensor and automatic sampler techniques for pesticide and nitrate sampling

Participatory monitoring, although old in its concept, has become much more developed during the last decades. Several types of participative monitoring systems can be characterised in relation to the intended goal of the promotor. Participatory monitoring initiatives can often be considered successful as they allow measurement of phenomena at frequencies and locations that are not reachable by a team of researchers alone. On the other hand, associated difficulties have been identified. First, it is not always easy to find the right number of participants to complete a large program, some "site-specific" programs may be canceled due to lack of participants. Moreover, in our field of water and environment, participatory programs can only hope to change behaviors if educational tasks have been planned in the projects. Lastly, participatory monitoring programs generally only work with a coherent method to analyse the data (computer infrastructure and/or scientific manpower) that must be anticipated. If the educational tasks and IT tasks are taken into account, participatory monitoring programs are not necessary less expensive than the institutional programs. The review of in situ monitoring tools in development (even prototypical) suggests possibilities of access to increasingly simple and robust tools or new probes attached to smartphones. Thanks to these tools, some problems, such as the lack of participants and some analysis bias, could be resolved.
»Participative monitoring: involvement of citizens

From a survey among the FAIRWAY case studies on indicator use and from the the information in this section of FAIRWAYiS, the following aspects can be deduced:

This section is currently restricted to project partners only, who should »Login to access it.

This section is currently restricted to project partners only, who should »Login to access it.

In this section of FAIRWAYiS we build on the literature review, expert and database consultation that was used to develop a preliminary selection of indicators that is described in »Agri-drinking water quality indicators and IT/sensor techniques. Here we take the next step in the development of agri-drinking water indicators (ADWIs), based on statistical analyses of available data from 3 of the 13 FAIRWAY case studies. This information is used in the »Harmonised indicator database.

ADWIs are defined within the DPLSIR-framework including a new 'link' type of indicator. The link indicator is developed to better explain the relationship between pressure from agriculture and state of water quality. Three of the FAIRWAY case studies, two in Denmark (Aalborg and Tunø) and one in France (La Voulzie) had sufficient data (i.e. long-term series of water quality in groundwater in combination with nitrogen (N) pressure indicators) for the required analysis of a shortlist of nitrogen, pesticide and link indicators.
»Framework, case studies and indicators

Of the nitrogen indicators the agricultural N surplus pressure indicator is identified and reconfirmed as a suitable indicator as it is the most significant, prevalent, effective, and easy to use indicator regarding nitrate contamination of water. The nitrate leaching below the soil zone would be the most appropriate state indicator but is seldom collected because sampling equipment to measure leaching is very costly to install and to maintain for monitoring, and the results can be difficult to upscale. However, in this study, nitrate leaching from pore water data were available from Tunø, Denmark. This is an exceptional case and here we show how they can be used in combination with the N surplus and groundwater nitrate data. In general, the more abundant state indicator such as nitrate concentrations in groundwater is recommended as this is the standard state quality indicator.

Lag times may provide a valuable insight into the mode of contaminant transport because they represent the shortest travel time that delivers the agricultural signal to the water sample collection point. In contrast, the groundwater age represents the mean residence time of the existing groundwater at the collection point. Therefore, knowledge of both groundwater age and lag time are important for protection of the aquatic environment.
»Conclusions and recommendations

A leaflet has been prepared to disseminate the importance of linking agricultural impact and drinking water quality response using examples from the 3 case studies. Workshops and presentations have highlighted the importance of coherency and consistency in agri-environmental measures since, in some hydrological context, only long-term coherent policies will produce sufficient effects. Passive samplers have been used to both involve local stakeholders in monitoring and improve water quality monitoring itself by adding an integrative sampling to point sampling.
»Dissemination to stakeholders